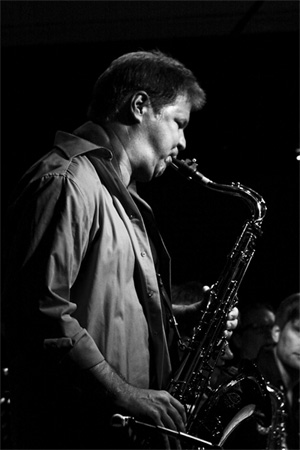 Since 1994 Mr. Beecroft has been an active member of the Berlin music community where he presently lives. Along with playing all of the "traditional" saxophone family (soprano, alto, tenor & baritone saxophones), flute and enough clarinet to get him self into trouble, Mr. Beecroft has a fondness for writing and arranging music for real life musical situations. The projects listed here are an expression of not only the desire to create music for the public but to create music with personal integrety.

A short chronological biography since the time that David came to Europe from his native Canada is a good indicator as to how he spends his time:

1994 At this time he moved to Berlin and has since become one of the most well known jazz musicians in the city.

1997 has been a regular at the Tiergarten Festival1995/99 he played as a guest soloist in the orchestra of the “Drei Groschen Oper” at the Deutches Theater. Since 1995 he has often been a guest of the Chameleon Cabaret as well as a substitute player with the RIAS orchestra (ZDF). He has played in all the big jazz clubs in Berlin like the A-Train, Schlot, Quasimodo, French Quarter, Badisher Hof etc. and for special concerts in churches or at the “Lapidarium”, or in museums and galleries. Since 1998 has been playing and touring for Jazz Radio Berlin. Recent tours include playing for MCM at the Mode-Messe in Dusseldorf and other big events through Germany.

2000 Began producing and engineering recordings for artists including Georgio Crobu, Ekkehard Wölk, Pepe Berns, Wolfgang Köhler, “Night Train” and many others. He has also began a project making documentary recordings of jazz musicians in Berlin in co-operation with Jazzagentur Berlin.
Completed his saxophone improvisation method book “Sound, Modality & Movement” which he currently uses for teaching at the Jazzschule Berlin.