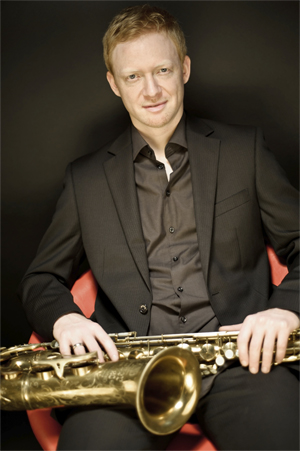 The band L14,16 which was founded during college days, won unanimously the 24th “Jazz Hoeilaart international Belgium” Jazz Contest. The first two CDs of L14,16 received the
"Preis der deutschen Schallplattenkritik". He has so far made recordings with his own projects and he also played in productions with Joey de Francesco, Jeff Hamilton, Chris
Potter, Greg Osby, Joe Lovano, Sammy Nestico and Randy Brecker amongst others.

In 2005 Steffen Weber was given the jazz award of the city Worms and he obtained as a member of the Felix Fromm sextett the first prize of the international jazz contest in Getxo.
He got a scholarship from the "Kunststiftung Baden-Württemberg" in 2009.

From 2008 to 2012 he was a steady member of the SWR Big Band. Since 2012 he has been a member of the HR Big Band.
He lives with his wife and his two sons in Weinheim/Germany